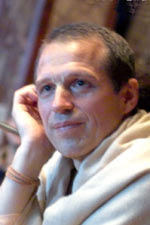 Recently, as His Holiness Sacinandana Swami was visiting the local community, he narrated an incident that happened to him during his visit to India in the 70's. This was a story underlining the points in connection to determination in serving the Spiritual Master. Once he was bathing in the Ganges and as he was getting out of the water he noticed two American brahmacaris, one skinny and the otherone a bit less, close enough so that he could hear their conversation. They were talking about how they will build a huge temple in Bombay with marble walls, crystal chandeliers, a big guest-house, hundreds of thousands of guests, opulent Diety worship, crowded festivals etc... All for the pleasure of Srila Prabhupada! Maharaja admits he found the convesration a bit amusing for he could clearly see holes in the brahmacaris' kurtas but admired their visionary spirit.

However, later on, upon meeting the two in person,one of them welcomed him with »Hare Krishna! This is Giriraja and my name is Sridhar!«

Posted by Parasurama Das at 2:54 PM

I am with you 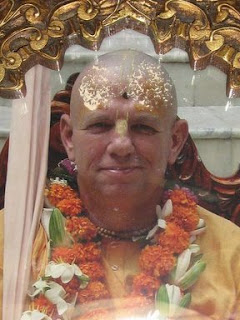 
from a letter to a disciple 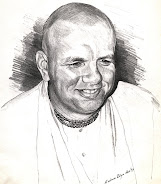